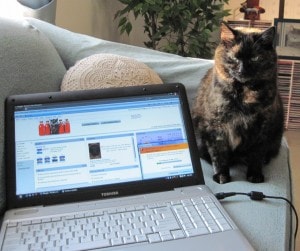 It’s about time that I get some computer time!  I tell you, it can be tough being a writer’s cat.  Not only do I have to be my mom’s mewse, but since she’s on the computer on her desk practically all day long most days, it’s hard to get a paw in edgewise.  And when she leaves the house for a while, she turns the computer off!  I haven’t been able to figure out how to open what she calls her laptop, and I hate that thing anyway.  When it’s in her lap, there’s not enough room for me, too, and that’s just wrong.  You can see me giving the thing the evil eye above.  She recently got something she calls a BlackBerry, even though it looks nothing like a berry to me.  I got all excited at first, because I thought maybe I could use that to write on, but I tried typing on it and realized that my paws are too big to work the tiny keys.

But I digress.   What I really wanted to talk about is that, despite the frustrations mentioned above, being a writer’s cat is really a very cool job.  For starters, it means that my mom is home with me a lot, and I really like that.  I just like knowing that she’s nearby, even when I’m sleeping.  And she says I’m her mewse, which I guess means that I inspire her writing, which is really nice to know.  I know how happy it makes her to be a writer, and I’m glad that I can contribute to that happiness.  It’s also kind of nice to have her at my beck and call all day long – and I have her so well-trained that she doesn’t even realize that that’s what’s happening.  She thinks it’s her own idea to get up and give me a treat occasionally, and to feed me my dinner in the afternoon rather than making me wait until dinner time.  Okay, so maybe the staring holes in the back of her head approach, whining and weaving myself around her legs, and generally making a pest out of myself after a certain time in the afternoon is a bit obnoxious, but it never fails to work, so why should I stop?!

Another thing I like about being a writer’s cat is that I force my mom to take breaks.  Even though she loves what she does, it’s not healthy for her to do it 24/7 (what an odd expression – how did humans come up with that?  I only have four paws, so I can’t count much beyond four.)  So I make sure that she takes breaks throughout the day by asking for cuddle time, looking so cute that she can’t resist taking my photo, or showing her where my dinner plate is (because , some days, I swear, she forgets what she’s supposed to do with it!).  And after a certain point in the evening, I think she needs to get off her computer and come to bed, so sometimes, I have to lead the way and wait for her in the bedroom.

As you can see, being a writer’s cat is not for the faint-hearted among us felines.  It takes a special cat to be a writer’s companion, but it’s also very rewarding (and I don’t just mean food rewards!).

5 Comments on Amber’s Mewsings: Amber and the Laptop