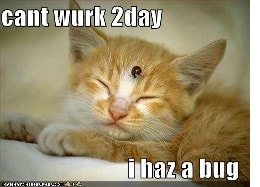 The news about a confirmed case of H1N1 in a 13-year-old cat in Iowa broke yesterday, and is causing concern among pet owners and veterinarians.  Previously, the H1N1 strain was thought to affect only humans, birds and pigs.

In the case of the Iowa cat, the cat’s owner had been experiencing fly like symptoms, and it’s believed that the cat contracted the virus from the humans.  The cat’s symptoms included lethargy, difficulty breathing, and loss of appetite.  The cat has fully recovered, as have the humans in the household.

A cat in Iowa has tested positive for the 2009 H1N1 influenza virus, state officials confirmed this morning, marking the first time a cat has been diagnosed with this strain of influenza.

The cat, which has recovered, is believed to have caught the virus from someone in the household who was sick with H1N1. There are no indications that the cat passed the virus on to any other animals or people.

Prior to this diagnosis, the 2009 H1N1 influenza virus had been found in humans, pigs, birds and ferrets.

The American Veterinary Medical Association (AVMA) and the American Association of Feline Practitioners (AAFP) are reminding pet owners that some viruses can pass between people and animals, so this was not an altogether unexpected event. Pet owners should monitor their pets’ health very closely, no matter what type of animal, and visit a veterinarian if there are any signs of illness.

The AVMA is actively tracking all instances of H1N1 in animals and posting updates on our Web site at http://www.avma.org/public_health/influenza/new_virus.

This is a developing story, and there is much about this virus that is not known at this point.  That being said, it’s important to not overreact until we have more information.  Keep the following things in mind:

With a developing story like this one, it will probably be a challenge to separate the facts from the inevitable panic this kind of news can cause.  Know your sources when it come to health information, and don’t overreact to every snippet of news you see come across the internet or your tv screen.

3 Comments on H1N1 Confirmed in Cat in Iowa