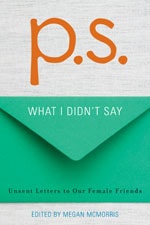 Female friendships are some of the most wonderful, powerful, and sometimes complicated relationships in women’s lives.  Have you ever had something you wanted to say to a friend, but couldn’t?  Have you ever wished you could go back in time to say something you didn’t?   In P.S. What I Didn’t Say, Megan McMorris brings together a collection of unsent letters written by a wide range of female writers to friends both current, past and deceased, covering, in the editor’s words, “BFFs, frenemies, and everything in between.”

From the touching The We of Me by Jacquelyn Mitchard about the kind of friendship that is so intense that it survives even a five year period of silence, to Kristina Wright’s The Last Letter about a friendship with an older woman that took place almost entirely through letters, to McMorris’ own contribution What Would Diane Do about the kind of true friendship that endures, P.S.  provides a glimpse into the private thoughts and emotions of the writers.  Each reader will, no doubt, find parallels to her own life – remembering the grade school friend who moved across the country, but still remains a vivid memory, or the college pal who has remained a trusted friend despite infrequent contact.

This book will help women better understand some of their own complicated friendships, and perhaps, provide the inspiration to get in touch with long lost, but not forgotten friends.  It will definitely make the reader treasure her own friendships, and perhaps serve as a reminder that it’s always better to say what you need to say while you still can, rather than wait until it may be too late.  A beautiful compilation, this book should go on every woman’s reading, and gift, list.

Megan McMorris is a freelance writer based in Portland, OR.  She is the

editor of Women’s Best Friend:  Women Writers on Their Dogs and Cat Women:  Female Writers on Their Feline Friends, and has written guides to hiking in Oregon and the Pacific Northwest.  Her outdoors column, Misadventures, appears in The Orgeonian.  Megan has also written for Real Simple, Glamour, Guiding Light, Prevention, Fitness, SELF, Woman’ s Day, and Shape, among other.  For more information about Megan, visit her website.

And where, you may ask, is the cat connection here?  In addition to being the editor of the wonderful anthology Cat Women:  Female Writers on their Feline Friends, Megan also provided a wonderful endorsement for Buckley’s Story:

“For those of us who think–or, rather, know–that cats have a thing or two to teach us in this life, you’ll appreciate Ingrid King’s story about her cat Buckley.”

2 Comments on Book Review: P.S. What I Didn’t Say – Edited By Megan McMorris