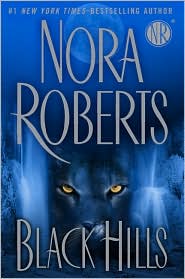 I’ve been reading Nora Roberts for decades, and while her books can be somewhat formulaic, as you would expect for the genre, they always provide a wonderful mixture of entertainment, escapism, and a great love story.  Who doesn’t like those elements in a book?  Over the past few years, her story lines have gotten a bit too “dark” for me, and I skipped several of her more recent releases such as High Noon.  I’m also not all that crazy about books about paranormal topics, and she lost me with her vampires and witches trilogies.

Then Black Hills was released – and I’m a fan again.  If the gorgeous cover with the mesmerizing cougar wasn’t enough to grab my attention, the description of the book was:  Black Hills is the story of Lil Chance and Cooper Sullivan, who meet as children when Cooper comes from New York City to spend a summer at his grandparents’ South Dakota.  Each year, with Coop’s annual summer visit, their friendship deepens from innocent games to stolen kisses, but there is one shared experience that will forever haunt them: the terrifying discovery of a hiker’s body.

As the years pass, Lil becomes a wildlife biologist and establishes a wildlife sanctuary on her family’s land, while Coop struggles with his father’s demand that he attend law school and join the family firm.   Twelve years later, fate reunites them again.  Coop recently left his fastpaced life in New York to care for his aging grandparents and the ranch he has come to call home. Meanwhile, strange things are happening at the Chance Wildlife Refuge.  Small pranks and acts of destruction escalate into the heartless killing of one of the cougars housed at the refuge, recollections of an unsolved murder in these very hills lead to an investigation and a hunt for a serial killer.  Lil and Coop both know the natural dangers that lurk in the wild landscape of the Black Hills. But now they must work together to unearth a killer of twisted and unnatural instincts who has singled them out as prey.

In addition to a well-told and well-crafted story, the addition of the cats was what made me enjoy this book so much – and it even made the serial killer content tolerable for me (I don’t usually read books with that subject matter).  Lil rehabilitates wild cats – cougars, lions and tigers, trying to recreate as much of their natural environment as she can so they can live out their lives in a safe environment.  One cat in particular, a cougar she has named Baby, is bonded to her to the point of following her back to the refuge when she tries to release him into the wild.

I met Nora Roberts at a book signing in Washington, DC last month, which probably added to my enjoyment of the book.  She was an entertaining speaker and answered questions from the audience for over an hour, and was extremely gracious while signing books for the over 800 attendees.