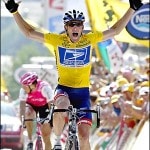 Lance Armstrong is probably one of the most amazing examples of how the power of belief and focusing on what you want can create miracles in your life. Cancer survivor, seven time Tour de France winner, inspiration to countless athletes as well as people dealing with cancer or other challenges in their lives, Armstrong is currently in the middle of yet another Tour de France.

I feel a strong personal affinity with Lance – he was the inspiration that helped my then 78-year-old father conquer his battle with prostate cancer. My dad was always a fan of cycling, and the Tour de France in particular, and he was fascinated with Lance Armstrong. When my dad told me about his diagnosis and that he had to undergo six weeks of radiation treatments, one of the first things he said was “I’m going to beat this. If Lance Armstrong can beat cancer and win the Tour de France, I can go through this and get better, too!” And he did, and enjoyed two more happy and relatively healthy years until he passed in 2004. While my dad was going through his treatments, I wrote to Lance’s Foundation, I thought they’d enjoy hearing the story of an old man in Germany being inspired by Lance Armstrong. They responded by sending a lovely package to my dad – a photo autographed by Lance, a Live Strong t-shirt, and several informational pamphlets. My dad was touched and thrilled, as was I.

As Lance cycles towards what could be his 8th tour victory, cheered on by millions around the world, I can’t help but reflect on how important the power of belief is in consciously creating our lives.

Scientific evidence reveals that heart-based belief affects everything from healing our bodies to physical matter. Cutting edge research by scientists such as cell biologist Bruce Lipton, Ph.D, shows that we can control even the cells in our bodies by energetic signals emanating from our thoughts. We have the power to reverse disease, create abundance, and even change reality itself. If we can make even simple shifts in belief, we can affect change that we didn’t think was possible – in our own lives, and by extension, in the world.

A belief is only a thought we keep thinking. Change the thought, and eventually, the belief will change. It really can be that simple.

And Lance Armstrong is a perfect example of how the power of belief makes the seemingly impossible happen. Nobody would ever have imagined a 38-year-old man riding in the Tour de France – except Lance. He believed that he could do it, and he’s doing it. Whether he wins or not is almost irrelevant – but I’ll be cheering him on. And whether he wins the Tour or not, to me, he’ll always be a winner.

Suggested reading about the power of belief:

1 Comment on Lance Armstrong and the Power of Belief