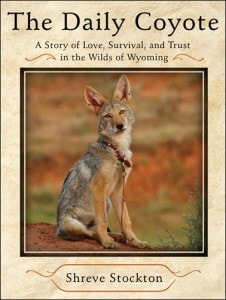 The Daily Coyote – A Story of Love, Survival and Turst in the Wilds of Wyoming is the story of a young city woman who trades the busy streets of New York City for the wilds of Wyoming, where she raises a ten-day-old coyote pup whose parents had been shot for killing sheep.

When writer and photographer Shreve Stockton moves back to New York City from San Francisco, she makes the trip across the country on her Vespa.  Along the way, she stops in the hamlet of Ten Sleep, Wyoming, population 300, and the wide-open spaces of the land and the beauty of the Bighorn Mountains capture her spirit.  After a few weeks of trying to settle back into her old city life, she listens to her heart, packs up her belongings and moves to Wyoming.

She develops a friendship that eventually turns to romance with a Wildlife Services employee whose job it is to protect lifestock by killing coyotes.  When he finds an orphaned coyote pup, he brings it to Stockton, who now has to make a decision.  She can either have the death of this pup on her conscience, since he is too young to survive on his own, or she can raise this wild animal in her twelve foot by twelve foot cabin, were she lives with her cat Eli.  With no experience raising and training a domestic dog, this fiercely independent city woman and the coyote she names Charlie forge an incredible bond, which is tested by Charlie’s sometimes unpredictable and even frightening behavior and his inherent wildness.  Despite some setbacks, the relationship between Shreve and Charlie deepens and evolves through mutual respect and becomes a testament to the strength of the bond between human and animal.

The author turned her diary of the daily challenges of raising Charlie, along with her breathtaking photographs illustrating the account of Charlie’s first year, into a successful blog, which became the basis for this book.  The book is a combination frontier adventure, love story, and a unique celebration of the bond between human and animal.  It is also a reflection on the nature of wildness versus domestication, as the author teaches the coyote to live with humans (and a cat) while Charlie settles Shreve’s wandering spirit.

And if you can’t get enough of Shreve and Charlie after reading this wonderful book, you can find daily photos of Charlie on the author’s wildly popular blog at http://www.dailycoyote.net .

6 Comments on Book Review: “The Daily Coyote” by Shreve Stockton